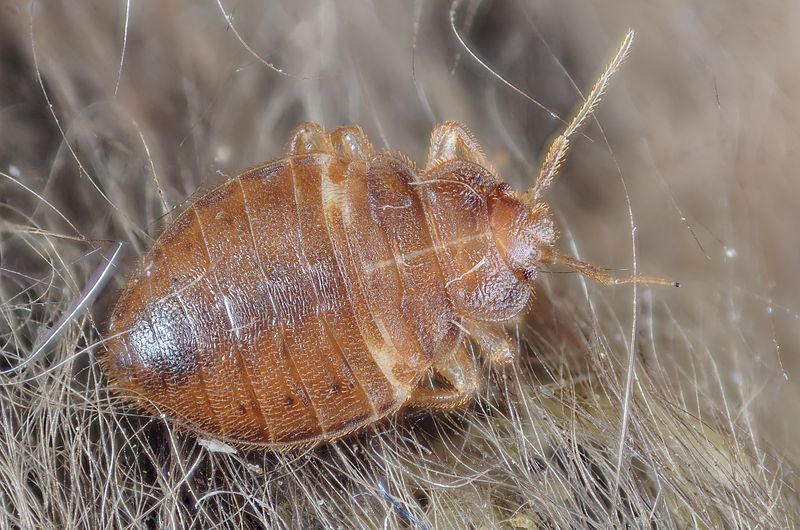 We deal with wildlife trapping, bat removal and animal relocation on a daily basis.  In doing so we always come across insects.  Mainly bees, wasp, hornets, yellow jackets and bat bugs.  Stinging insects can be handled by our poison free method with prevention and control.
Bat bugs are generally left behind once we exclude the bats. They appear nearly identical to bed bugs, but if you've had bats in the attic you may want to consider bat bugs as your insect infestation.  Bat bugs host on the bats and once they are excluded they will come down into your living quarters in host on you and your family.  Look for tiny little red bumps that are itchy, similar to bed bug bites.  Same thing can be identified with birds and other rodents. They carry many mites and parasites which will leave the nest and the rodents and come into your home.

Why do Bat Bugs Enter Your Home?

The main reason you have bat bugs in your home is due to the colony of bats living in your home or attic. Once the bats enter your home, bat bugs cling to their back and make their way into your living quarters. Bat colonies typically roost in attics, wall cavities, chimneys, and other areas of the house. Bat bugs typically stay close to their host and do not enter the home unless the bats have been evicted or one makes it into your home. Once the bats have been excluded it is known that bats appear from cracks and or openings along the ceiling. In some cases bat bugs may not even appear for one to four weeks later. Once the bats are excluded the bat bugs appear closer to humans to substitute the bat host for you.

How do Bat Bugs Feed?

Bat bugs will typically feed while their host is sleeping. Bat bugs are blood suckers, meaning they pierce the skin, inject saliva as they probe for blood vessels to feed on the blood. A typical adult bat bug will feed for up to 15 minutes until it is full and then will hide to digest their food.

Best Way to Get Rid of Bat Bugs

First and foremost you have to get rid of the bats before you can get rid of the bat bugs. We can help with that! Simply just spraying for the bat bugs may temporarily get rid of the bat bugs, but will not permanently solve your bat bug problem. Controlling the bat bugs through and integrated pest management approach is the best way to solve your problem for good. This is achieved by prevention, sanitation, and treating targeted areas. For prevention we seal up all potential entry points to prevent the return of the bat colony. During the prevention process you can also exclude the bats through a one way door system. After the host has been excluded we recommend you have a professional pest control company spray insecticides and treat problem areas. We can recommend certain companies who service the Michigan area. Sanitation is done by frequently washing clothes, bedding and vacuuming problem areas to stay clean.

If you find bat bugs in the house, contact us today and we can help. We can set up an inspection on your home to investigate your home home to see if you have a bat problem.